Full Disclosure: I tried climbing a few times before it stuck.

Full Full Disclosure: I still have a large amount of imposter syndrome and fear when it comes to climbing.

I tried climbing once as a kid on a portable wall, again in college during an Outdoor Recreation class, and I gave up on it rather quickly. For some reason, I still found it intriguing though.

Which is why in 2017 my boyfriend Martin and I decided to sign up for an Intro to Climbing class to learn more about it. I’m pretty sure I thought taking a class would reveal to me some magic technique I was missing and I’d turn into an amazing climber immediately.

The class turned out to be taught by a guy named Houston, who also happened to be a friend of my friend, Jenn.

Martin and I were the only people in the class so it went pretty smooth and we enjoyed it, but I still didn’t make it to the top of any routes. I felt more confident then I had about climbing before - mostly from learning to belay, instead of relying on other people to do it like I had in the past.

I enjoyed it enough that I wanted to keep practicing, letting my negative thoughts that held me back before go (or at least tried to).

I talked to Jenn about the class and she had a membership to the local gym so we made plans to climb together. Even though Martin and I took the intro class I don’t know if either of us would have felt comfortable going back on our own.

I finally finished a route - because Jenn was belaying me and I asked her to be let down she said, “Do two more moves THEN I’ll let you down”. So I ended up finishing that route, then a few more.

There are two things that got me to stick to climbing after that belay class. That encouraged me and helped me face my fears. Those two things being Jenn and Ascend. So I figured I’d interview Jenn to see her side of the story!

When did you get exposed to climbing for the first time?

I started climbing when I studied abroad in Australia in 2014. I joined a student organized club at the school I was studying at called the “Outdoor Adventure Club” and one day we took a trip to a huge crag. This was my first time climbing outside and leading outside.

Did you seek out climbing on your own or have a friend get you into it?

I joined the outdoor adventure club with the intent of meeting people, going on hikes, different trips around Australia, and learning new skills. Through the club I became good friends with one of the coordinators of the club and he taught me most of the climbing basics and gave me some of my first climbing gear.

Do you remember how we started talking about climbing at first?

If I remember correctly, you told me that you and Martin did a climbing clinic through REI and you had one of my best friends, Houston, as your instructor!

Did you think I’d end up sticking with climbing based on the first time we went climbing together?

I could tell that you were motivated to climb and wanted to push yourself, but I was unsure if you would stick with it after you and Martin moved from Raleigh. Definitely stoked that you found a climbing community up in Pittsburgh!

What made you push me to try more moves even when I would ask to be let down?

I could tell that when you were asking to be let down, it wasn’t because of physical limitations, but mental limitations, such as fear of heights. One of my friends taught me the trick to just challenge the climbers to try to do two or three more moves/attempts and most of the time the climber ends up finishing the route after that challenge.

Did you know I needed that push or is that something you do for anyone?

I could tell you needed a bit of a push and some motivation, but only because I realized that the height and frustration were the main things keeping you from finishing a climb. I try to be supportive for almost anyone that I’m belaying, but definitely for beginners. I remember how good it felt to finish a route when I first started climbing, so I try to push my friends who are beginners to get to the top and feel that same gratification.

Based on our experience climbing at a gym a few times together, are you surprised I ended up working full time at a climbing gym? Why or why not?

I absolutely love how you ended up working at a climbing gym! I’m not too surprised, especially with your background in recreation and your drive for working somewhere you find gratification. Also, I’m jealous that you probably get a discounted gym membership haha

Honestly, I’m surprised I ended up working at a climbing gym most of the time. My background has always been in the sport and recreation space though, so it does fit. I studied Sport and Recreation management in college and had worked for YMCAs throughout my life. I’m thankful I found Ascend when I moved to Pittsburgh, as working for a company that has similar values to me is something I care deeply about. It all turned out well in the end, and Jenn is right, the free membership is pretty nice.

What is one of your favorite climbing memories?

Oh man that’s a hard question. The first time I did a multi pitch climb is definitely up there. A friend and I took a trip to the Blue Mountains in Australia, and did this awesome multi-pitch called Sweet Dreams. It was straight up a huge mountain face, and the climb was about 850 feet, five pitches total. I’ve never been afraid of heights, but it was definitely an experience looking down and having so much space in-between you and the ground. The views during the climb were amazing.

Is there anything you think we could do to help more women try climbing?

I think having more learn-to-climb clinics will always help. I’m also excited to see the increase of new climbers after climbing is broadcasted during the summer Olympics! At the climbing gym I go to in Raleigh, they have a women only climbing league. I think the more that women feel comfortable in climbing gyms, or just gyms in general, the more we’ll have in the climbing community.

What do you think is the biggest obstacle in the way for people interested in trying climbing?

I think the biggest obstacle is finding someone who will teach you how to climb, help you with technique, but most of all, just finding a belay buddy. The financial burden is also an obstacle, not everyone can afford the $20 day pass to gyms, or the $80-100 per month for a gym membership. The gear, such as harness, shoes, and belay devices, are also not the cheapest.

How have you been handling the new world of self isolation?

Oof, I’m slowly going crazy but keeping up with working out and trying to do things to stay productive. I’ve taken advantage of this time and have done some DIY projects, such as refinishing a kitchen table and chairs, and also deep cleaning and purging my closet and room.

Any workout suggestions or resources you’ve been digging during this crazy time?

Hmm, I’ve been doing a lot of running, and also a lot of HIIT workouts. I’ll do 4 rounds of 10 minutes, and during the 10 minutes I’ll do three different exercises and see how many rounds I can do in that 10 minute period. And then maybe a quick run afterwards. My apple watch/smart watch has been awesome during this time because it gives me a goal for active calories, exercise minutes, etc. and motivates me to be active during the day.

Any other interesting tidbits or thoughts you want to share?

We (Lily and Jenn) did this awesome backpacking trip in Virginia that I would definitely recommend to anyone! The Three Ridges Trail!

The backpacking trip we did in 2018 was awesome, I agree with Jenn. It was my first time camping like that as an adult on my own. I felt empowered even after the trip, and it was great to do it with two other women (Jenn’s friend Bretta joined us).

I’m so thankful Jenn took the time to answer these questions for me. I hope putting this out there helps show people that anyone can get into climbing - whether you’re scared or whether you are chomping at the bit from the start. I’m trying to remember these days that I am a climber, even if I spend a lot of time on V0s. Everyone starts somewhere and everyone’s journey is different.

When we’re able to reopen the gym and get back to climbing, remember that people are probably more worried about themselves. They aren’t judging you for where you’re at. And if you need a newbie buddy, I’ll be right there with you. 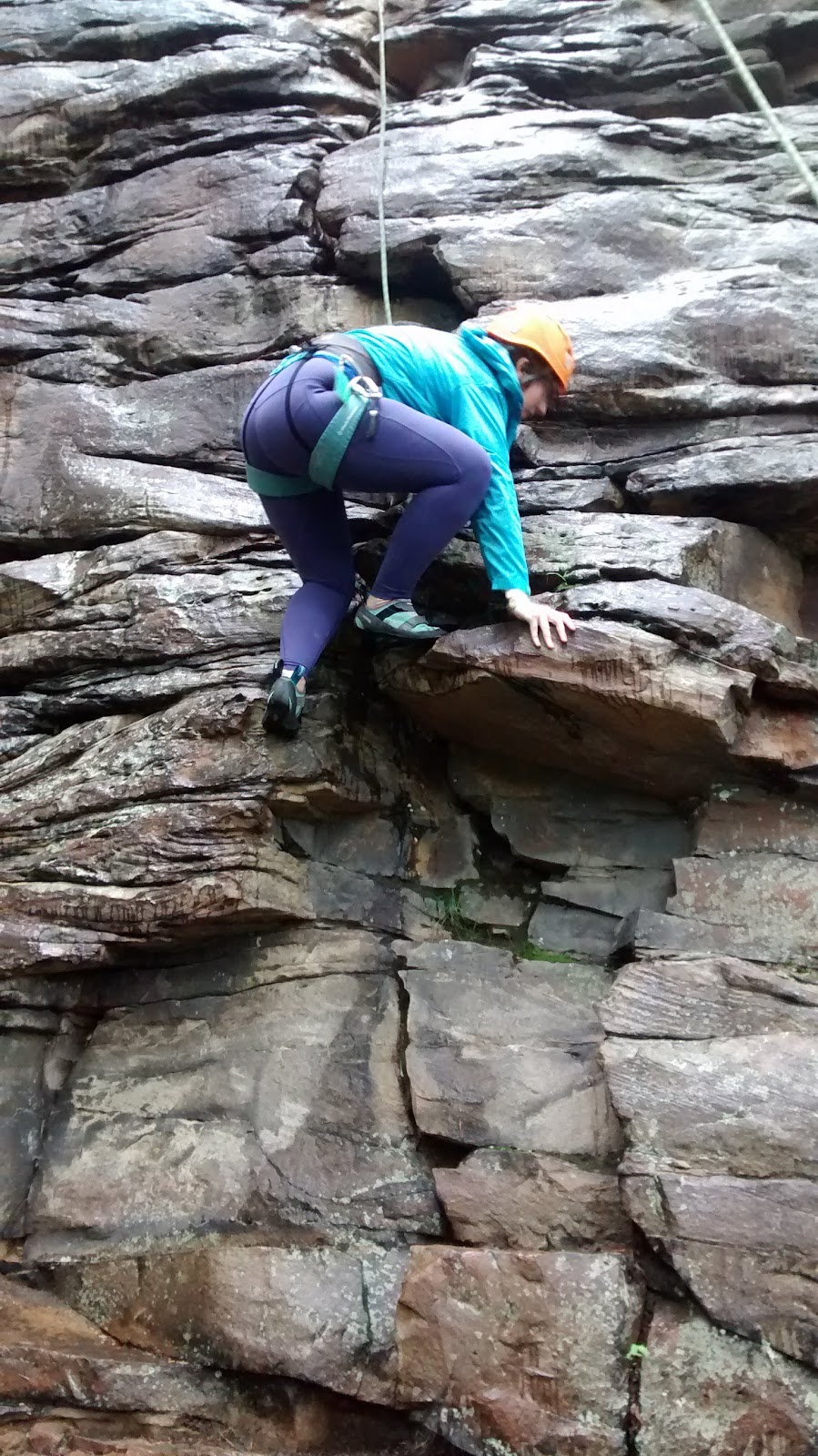 Need to alter your membership status? Submit a request.

Get entered to win a $20 Gift Card by taking this short survey.

Want to know what makes us tick? ASCEND's team and mission.

Interested in working at ASCEND? Read up and apply.